What is Fabry Disease?

Fabry disease is caused by the lack of an enzyme needed to metabolize lipids, which are fat-like substances that include oils, waxes, and fatty acids. The enzyme is known as ceramide trihexosidase, also called alpha-galactosidase-A. The deficiency of this enzyme causes insufficient breakdown of lipids, which build up to harmful levels in the eyes, kidneys, autonomic nervous system, and cardiovascular system. As the gene that is altered is carried on a mother’s X chromosome, her sons have a 50 percent chance of Fabry disease inheritance, and her daughters have a 50 percent chance of being a carrier. Fabry disease is classified into two types: Classic and Late-onset.

Classic Fabry disease, which is the less common form, typically manifests in childhood, while late onset Fabry disease, as its name suggests, usually begins with symptoms in the 30s or 40s.

Are you a Fabry patient or caregiver?

Become a member of LSDSS now to get support and know the latest developments about your disease!

The estimated prevalence of FD is 1/40 000 to 1/117 000 live births globally. The incidence of Fabry disease in India is likely to be higher because of the tradition of consanguineous marriage in some parts of the country.

Fabry disease is caused by mutations in the GLA gene, which is located in the X chromosome (one of the two sex chromosomes, the other being the Y chromosome).

What are the symptoms of Fabry disease?

Fabry disease symptoms usually begin during childhood or adolescence and include:

The heart may also become enlarged and the kidneys may become progressively involved.

Some other symptoms include:

How is Fabry disease diagnosed?

In male patients, the diagnosis of Fabry disease can be done through enzyme tests, which measure the activity of the alpha-galactosidase A (Gal A) enzyme in the blood. These tests use blood drawn from the arm and can be done at a doctor’s office or in a lab setting. In the case of Fabry disease in females, Gal A’s activity is often within the normal range, limiting its usefulness to these individuals. Therefore, a genetic test is required for females, and is also recommended to confirm the diagnosis in male Fabry patients.

The most definitive assessment, a genetic test, looks for disease-causing mutations in the GLA gene. Both males and females only have to inherit one mutated GLA gene copy to develop the disease. Cells from a sample of blood or saliva are usually used in such testing. This type of test should be considered for any individual with a confirmed or suspected clinical diagnosis of Fabry, or a family history of the disease.

Enzyme and genetic testing also can be done before birth to see if an unborn baby has a disease-causing GLA mutation.

Newborn screening for Fabry typically involves collecting a blood spot from a heel prick and analyzing the levels of Gal A activity.

A test for lyso-Gb3, another fatty substance that accumulates in the blood or in the urine as a result of Gal A deficiency, also can help to achieve a Fabry diagnosis, particularly in female patients, and indicate the severity of the disease.

Fabrazyme®, developed by Sanofi Genzyme, is the first enzyme replacement therapy (ERT) for Fabry disease. Another ERT, Replagal®, developed by Takeda, is in use in many countries, including Canada, Russia, the United Kingdom, Mexico, Israel, and many members of the European Union. However, it has not been approved by the U.S. Food and Drug Administration (FDA).

Galafold® (migalastat) is an oral medication developed by Amicus Therapeutics as a treatment for Fabry, which has been approved in some countries such as the US, EU, Japan, Switzerland, Israel, Australia, South Korea, Canada, and Argentina.

Treatment for Fabry is extremely expensive and life-long, but is available to some patients in India through humanitarian aid.

To get information about ongoing/future clinical trials in India for Fabry, please visit https://clinicaltrials.gov/ct2/results?recrs=ab&cond=Fabry+Disease&term=&cntry=IN&state=&city=&dist=

If you or someone you know from India has been diagnosed with Fabry, please register with us by filling this form to get further information and support. 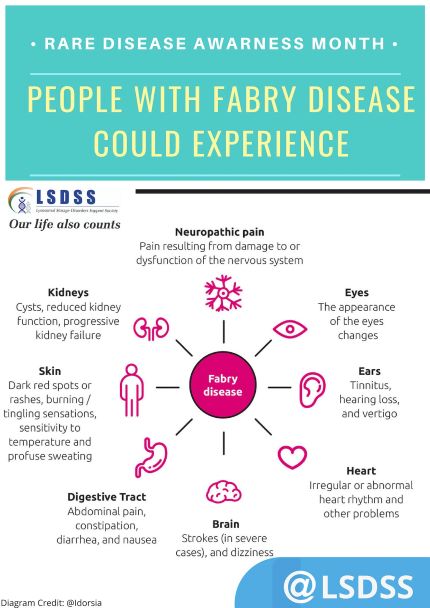 What does Fabry disease do to a person?

People who have Fabry don’t have or lack the enzyme alpha-galactosidase A that breaks down certain lipids or fats. These fats get collected in blood vessels and tissues, raising the risk of heart attack, stroke and kidney failure. This genetic condition is passed from parents to the child.

What are the signs and symptoms of Fabry disease?

How long do people with Fabry disease live?

What age does Fabry disease start?

Symptoms of classic Fabry disease appear during childhood or the teenage years. One of the main symptoms—a painful burning sensation in the hands and feet—may be noticeable as early as age two. Symptoms get progressively worse over time.

People with late-onset Fabry disease don’t have symptoms until they’re in their 30s or older. The first indication of a problem may be kidney failure or heart disease.

I, or someone I know, have been diagnosed with Fabry Disease. What should I do?

Fabry disease treatment in India is extremely expensive, costing anywhere from several lakhs to a few crore rupees per year. A few companies have been providing free treatment for Fabry disease in India under their charitable access programmes. However, at present, getting treatment under charitable access is very difficult as the companies are not accepting any more patients. We advise you to get yourself/the patient enrolled on Government of India’s portal for crowdfunding and CSR donations for rare diseases by meeting the doctor at your nearest COE with all medical reports for medical evaluation. You can find the details of your nearest COE here.

In addition, you may request the doctor to explore the possibility of getting charitable access to treatment by asking the doctor to contact these companies.

Also, please register yourself with the LSDSS by completing this form to get support and know the latest developments about the disease.